Posted on September 10, 2013
Hi Everybody! I’m so excited to share this Apple Strudel recipe with you today, not only because it’s one of my very favorite desserts, but also because it’s one of those recipes that has taken me a while (and by while I mean a couple of years!) to master. This is a classic apple strudel recipe, with thin layers of dough filled with the wonderful flavors of apples, cinnamon and raisins; perfect for this time of year! To me, this apple strudel tastes like home. It’s one of the traditional Czech desserts, and growing up, it was one of my grandmother’s specialties. The hard part of the recipe is making the dough, because you literally need to get it paper thin and super elastic without tearing it. It takes a little bit of practice, but it is well worth the effort, because once you learn how to do it, you will be able to make a delicious strudel that looks and tastes like it came from the cafe’s of Europe! Dusted with some sugar and served with sweet whipped cream, it’s the perfect sweet treat with some afternoon tea or coffee!
. 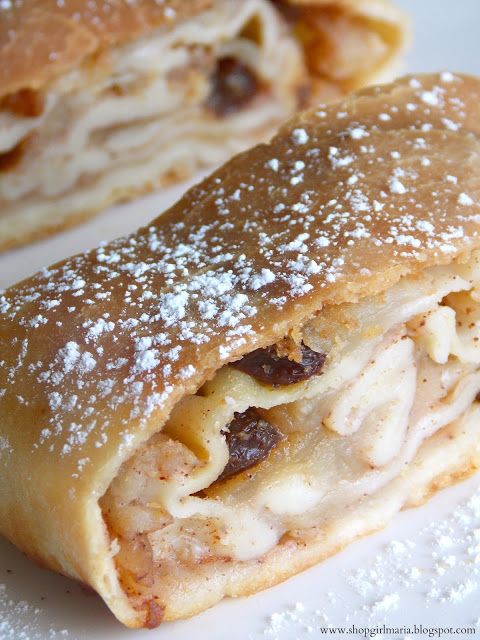 CLASSIC APPLE STRUDEL
(Recipe from Apetit Magazine)
*Makes 2 Strudels*
.
YOU WILL NEED
DOUGH
1 1/2 – 2 cups all-purpose flour
2 tbs canola oil
1/2 tsp lemon juice
1 egg
1/4 tsp salt
3 1/2 oz warm water
.
FILLING
8 apples, peeled and cored
8 tbs unseasoned breadcrumbs
6 tbs granulated sugar
2 tsp ground cinnamon
7 tbs unsalted butter, melted
1/4 cup raisins
,
DIRECTIONS
,
1. Begin by preparing your dough: Whisk together the water, oil, salt, lemon juice and egg and set it aside. Sift the flour into your electric mixer bowl and make a well in the center, then pour in the wet ingredient mixture, and mix until a soft dough forms (begin by using 1 1/2 cups of flour, and if the dough is too wet add more flour, I used almost 2 cups). Using the dough hook attachment, knead your dough for a couple of minutes, until it is soft and elastic. Form the dough into a ball and place it on a plate and cover it with a hot bowl or pot (I boiled some water, added it to the pot until the pot warmed up, then poured it out and dried the pot, and covered the plate with the dough with it). Let the dough rest of 30 minutes.
.
2. In the meantime, prepare your filling. Thinly slice your apples, and to make sure that the raisins are plump, soak them in some hot water, then strain them. Divide the dough in half (each half will make one strudel), and roll out the first half on a floured surface until it is thin. Then, take out a clean kitchen towel, and place the dough on it. Using your hands, gently stretch out the dough and make it as close to the size of the kitchen towel as you can, and as thin as possible without tearing it. Cut off any rough edges to make a nice rectangle. Preheat your oven to 375 deg F and line a baking sheet with parchment paper.
,
3. Brush about 2 – 3 tbs of melted butter on top of the stretched out dough, then sprinkle it with half of the breadcrumbs, sugar and cinnamon, and lay down an even layer of half of the apples and sprinkle them with the raisins, leaving a 1 inch border around the sides, and a 3 inch border on one of the short sides. Begin rolling the strudel jelly roll style, starting at the shorter end (not the end with the 2 inch border). Once you have formed the strudel, place it on your baking sheet, tuck under the ends and brush it with some butter. Repeat the same process for the second strudel.
.
4. Bake for about 50 minutes, or until the strudels are golden brown, brushing them with butter a couple of times during the baking time. Let rest for at least an hour before eating. Dust with confectioners’ sugar and serve with whipped cream or vanilla ice-cream.
.
(*NOTE: The original recipe was in metric measurements and I converted them to cups/oz. If you prefer to use the metric measurements to be more precise, here they are: 280g all-purpose flour, 100ml warm water for the dough.)
.
Happy Baking, Everyone!