Posted on February 20, 2013
Hi, Everyone! So, the other night my husband and I were sitting on the couch watching a movie, and craving snacks (like we usually do), so he got up to see what goodies we had in the pantry. He came back and said, “We don’t have any man snacks!” which I guess was true since our pantry was still filled with tons of different kinds of chocolate left over from Valentine’s Day. So I thought… what’s his favorite “man snack”? And the answer is Cheez-Its, of course! So I decided to attempt to make a homemade version, and I can’t believe how good they turned out! They literally taste JUST like the store bought kind! And the ultimate stamp of approval? My husband said they were addicting. I think they passed the test!
. 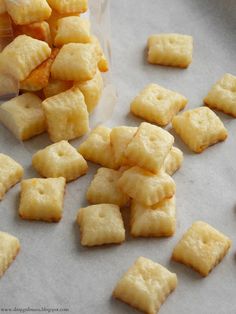 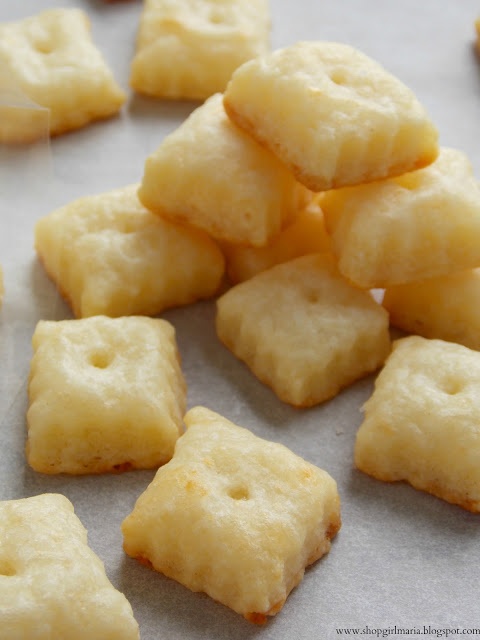 .
DIRECTIONS
.
1. First, mix together the shredded cheese,  half of the salt and the softened butter. (I used sharp aged white cheddar cheese, but you can use whatever kind of cheese you like. I shredded my own cheese just because I think it has better flavor and melts better, but you can use pre-shredded too to save some time!) Add in the flour and mix until the dough looks like little fluffy clumps. Then, with the mixer running begin adding the ice water and mix until a soft dough forms. (use as much ice water as you need for a dough to form).
.
2. Divide the dough in two, form each into a disk and wrap in plastic wrap. Refrigerate the dough for about 30 minutes. Then, roll the dough out on a floured surface into about an 1/8 inch thickness and using a fluted pastry cutter, cut the dough into about 1 inch squares.
.

3. Preheat your oven to 375 deg F and line your baking sheets with parchment paper. Transfer your little cheez-its onto the parchment paper, make a hole in the center of each with a toothpick, then sprinkle them with the rest of the salt. Bake for about 7 – 10 minutes (baking time will depend on your oven, just watch them carefully so they don’t burn!), or until they have puffed up and the edges begin to brown. Let cool before eating. (They are best eaten right away, but you can store them in an airtight container). 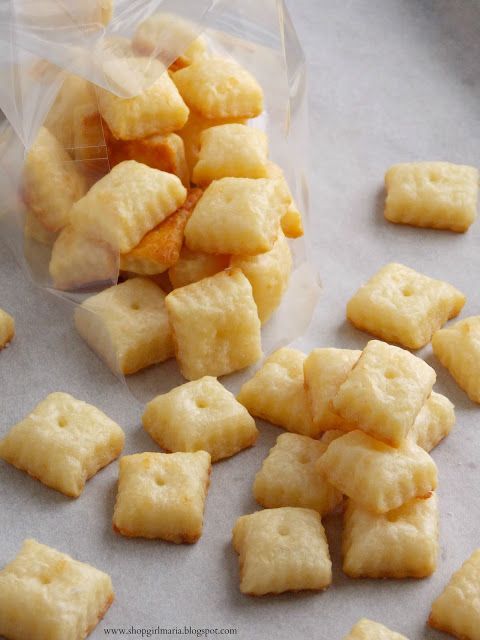 /
These homemade Cheez-Its are so quick and easy to make, and if you love the store bought version, these taste almost exactly the same! And from start to finish they only take about an hour to make! But I warn you, even though it may look like you have lots and lots of little Cheez-Its lined up on your baking sheet, they will be gone very quickly! Because they really are addicting!
Happy Baking, Everyone!